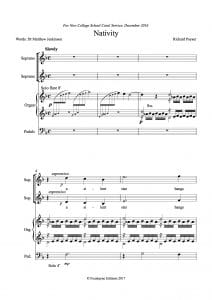 Nativity was composed for the choristers of New College, Oxford, to perform in the New College School Carol Service, 2016, with Robert Quinney on the organ. The beautiful words were written by Dr Matthew Jenkinson, Deputy Head Academic of New College School, and pay homage to the American poet e e cummings.

to a resistless king.

fragile on a throne

under a silent star.

The music captures the mystery and expectancy invoked by the text, and conjures a lyrical simplicity that conveys the love between mother and child. The vocal parts are not too technically demanding, and allow the singers to focus on the emotional content of the words and the performance itself. The anthem starts and ends with a depiction of the Bethlehem star (‘a silent star’) for the organ, as if shining for all eternity, to guide lost Man to the miracle of God’s love incarnate.